Posted on November 11, 2018 by happierheather

The Chocoholic Frolic 5k/10k was held at Harriet Island in St. Paul on Saturday, November 3rd. This race is popular because of the chocolate treats given both at the water stop, and at the finish. Plus, they offer a finisher medal and 1/4 zip shirt for all race finishers.

I had not run a timed 10k road race since 2016, which feels unbelievable, considering all of the races and miles I’ve run in the past few years. Even though I’m not someone who loves chocolate, I decided to sign up because it had been a while since I’ve run an official 10k, and because several friends were registered and I have a fear of missing out.

Prior to the race, packet pickup was offered on two consecutive Fridays; the first in Minneapolis and the second in St. Paul. Both days only offered hours of 10am-5pm, which is impossible for many to get to, if they work full time day hours. Add in the fact that many do not work directly in Minneapolis or St. Paul, and I felt the times weren’t convenient for very many. Thankfully, Nate was able to stop by the St. Paul location the night before the race, so my friends and I didn’t have to be at the race site quite so early!

Packet pickup was also offered race morning, but would have been inconvenient, considering there was not a bag drop for this bag. This means that runners would have had to park blocks away, get their packets, walk back to their cars, then walk back to the race start. Also, considering this is a mid-sized November race in Minnesota, I feel a bag drop should have been offered. We have the potential for SO many layers this time of year!

Next, the bathroom situation was less than adequate for the number of runners. The pavilion at Harriet Island was open, and has indoor restrooms; however, considering most of the runners were female, lines were long until the 5k started. Other than the eight or so stalls indoors, there were only TWO porta-potties outside the pavilion, which also had a very long line. There were not any porta-potties on the race course.

The course was an out-and-back for the 10k. There were some views of the river, and trees lined the course. For runners who don’t spend much time in this area, it was a nice course. I heard a few runners comment how pretty it was. I have run the course before for other races, so it wasn’t anything new, but I don’t have any complaints about it.

At the finish line, finishers were given a chocolate bar, and a medal. There were also volunteers on hand to take unofficial pictures, in addition to those taken by the race photographers. Post-race, runners had the option to purchase the professional pictures, or share them to social media without purchasing them.

Inside the pavilion, there were plates assembled, which held pretzels, Oreo cookies, animal crackers, a banana, and a cup of chocolate (fairly certain it was Hershey’s syrup). There were also some Nut Thins available. I wasn’t necessarily impressed with the chocolate offering, but I can’t complain about the other goodies on the plate.

Overall, I don’t feel the need to do this race again. The price (I paid $25) was excellent, swag was good, and course was nice. However, the limited packet pickup hours, lack of bag drop, and inadequate restrooms make this race less appealing. 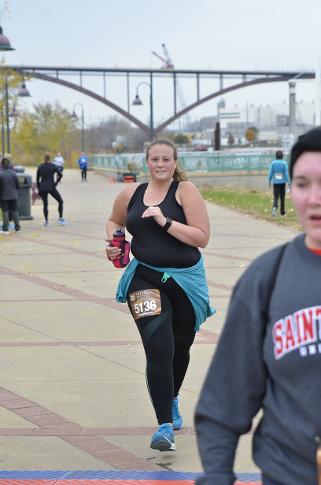 This entry was posted in Uncategorized and tagged running. Bookmark the permalink.