My marathon training plan called for 23 miles this past weekend, which was scheduled for Saturday morning. Unfortunately, the weather has been rainy almost every day over the past week, so it was decided that we would run on Friday night instead.

I’ll be honest and admit that I was not looking forward to running on Friday night after work. We would be starting at 5:00 pm, meaning we wouldn’t be done running until sometime between 9:00 pm and 10:00 pm. Having not done this type of distance at any time other than a weekend morning, there was the question about how I’d be affected by food throughout the day, and energy levels. But, it was that, run in the rain the entire time, or risk having to run by myself.

On Thursday night, I packed up everything I would need for a Friday night run, including my reflective vest and headlamp. I had my gels ready, along with empty water bottles that I would fill at work before meeting my training group. I had everything I needed, but was still nervous about committing to such a long run on a Friday night.

I arrived at our meeting spot a few minutes before 5:00 and we were able to get started right away. Three ladies started an hour earlier, getting in just under four miles. They met us back at the parking lot, to do the bulk of the miles together. We started with an out-and-back that was just under 7 miles each way. Our group split up at the half way point, because of differing paces.

After that, we refilled our water in the parking lot and headed back out for a 4 mile loop. Unfortunately, my training partner and I went out a bit fast and could feel it as we headed out for our four mile loop. It was decided that we would go to 20 miles instead of 23, which saved us about a half hour in complete darkness.

Once we returned to the parking lot again, we did some stretching, though I did very minimal. We decided to head to a local restaurant for a margarita to celebrate the start of our taper. Truth be told, I also had a burrito, but the margarita was the important part. 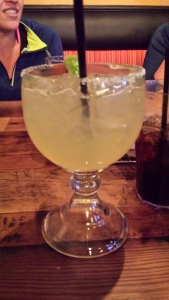 Cheers to the taper!

When I got home, I showered and went straight to bed. I knew the morning would be difficult since I didn’t stretch properly, but I was TIRED! Running that far after a full day of work is extra exhausting.

As predicted, I hobbled around like a zombie for much of Saturday morning, but it was worth it for the pleasure of sleeping in both days of the weekend. I feel like I caught up on some much-needed sleep. After a bit of stretching and foam rolling, though, I felt pretty good. I had just a little bit of residual stiffness, which was gone by Sunday afternoon.

Even though I didn’t go all the way to 23 miles, I’m feeling very confident. Friday’s 20 mile run was 15 minutes faster than my previous 20 mile run and I felt good throughout. I’m going to enjoy this taper period and focus on keeping myself properly hydrated between now and the marathon in four short weeks.

I’ve said it before, but I’ll say it again. I cannot believe how good I have felt throughout this entire training cycle. I have had very little soreness and only one of my short runs was miserable; but only because it was the first day of running in heat and humidity. I’ve enjoyed the company of my training partners and would never have attempted, let alone completed this, without them. I can’t wait to celebrate with them after we’ve all crossed the finish line!