Posted on January 7, 2012 by happierheather

On New Year’s Day, I ran Team Ortho’s Polar Dash 5k. The morning was a cold one with temperatures in the low 20s, but the strong winds made it feel like 12 degrees. It was very tempting to shut off the alarm clock and go back to bed, but I couldn’t let myself start a new year that way, so I got up and dressed for the weather.

My outfit of choice was long johns, running pants, a long sleeve moisture wick shirt, a fleece hoodie, the jacket from the previous night’s race, Bondi Band running hat and gloves. I left early because of the snow that had fallen the night before, in case the roads weren’t cleared yet. Thankfully, the plows had done a good job and I had time to stop for a breakfast sandwich on my way.

Parking was located several blocks away from the race village, so busses were used to shuttle runners back and forth. When I got out of my car to walk to the bus, I made a last minute decision to ditch the fleece hoodie because it felt warmer than I thought it was going to be. I brought fleece pants and a shirt with me for after the race in case I needed an extra layer of warmth for the ride home.

Once I arrived at race village, I quickly spotted on of my running friends and chatted with her and one of her friends while waiting. We had plenty of time to chat, use the restrooms, drop our stuff at gear check and take a picture. It was nice not feeling rushed before the start of a race, which is sometimes what happens at these larger races.

When 10:05 arrived, I headed to the start line for my 10:15 start (10k and half marathoners started at 10am). The wind was gusting and it was obvious the wind would be at our backs for the first half and blowing in our faces for the second half. Great.

The first half of the course was uphill and the combination of 20+ miles and a race less than 24 hours prior made my leg muscles ache more than they had in a long time. I walked twice in the first 1.5 miles and was feeling a bit defeated. I told myself to just do what I could and take it easy if I had to.

After my second walk break, I felt like I hit my second wind and was able to get to the turn around and start the descent to the finish line. Running downhill always feels easy for me, so I was enjoying the break it gave my legs; however, I would have liked to run faster. The combination of all distances (2500 runners) doing the same out and back course (10k and half marathoners did the course more than once to get their mileage) and the varying speeds created a bit of a jam. There seemed to be a large number of newer (or rude?) runners/walkers who didn’t understand race etiquette, which made it very difficult to get past them; especially when they were walking three or four abreast.

The closer I got to the finish line, the tighter the crowd seemed to be, so I actually had to slow down instead of doing my usual sprint to the finish. Then one of my pet peeves occurred; people were stopping ON the finish line instead of going through it and then finding a place to stand. I ended the race feeling like I had a lot left in my gas tank and being disappointed all around.

I’m so glad I went into the race not having any expectations other than to finish it. I basically signed up for the fleece shirt and the finisher’s medal. I’ve determined this is not a race I would plan on doing again in the future unless they changed the course logistics. 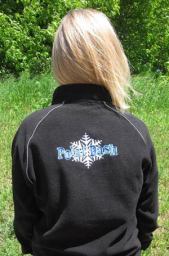