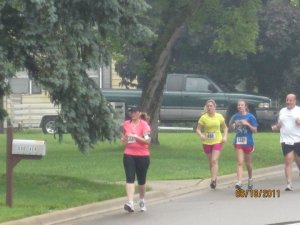 I never saw my photographer until the last stretch.

After rolling out of bed, wondering whether the race would be cancelled, I dressed and started getting ready both physically and mentally for my first 4 miler. I quickly checked the Dew Days website on my Blackberry to see if there was any word of a cancellation. There wasn’t.

I finished my preparations which included packing extra clothes to change into something dry after the race and warming up a bagel with peanut butter. When I pulled out of the driveway, the rain was coming down so hard, I couldn’t see the end of the block. This didn’t look good.

The short drive took twice as long as usual because of the rain and limited visibility. To top it off, I got slightly turned around and drove down a street I was sure my car would get stuck in because the standing water was so deep. I wondered if one would get disqualified for swimming through the course.

Ten minutes before the race was scheduled to start, I finally found a parking spot. As I threw on a baseball cap to keep the rain out of my eyes, the rain abruptly stopped. I ran to the registration table about three blocks from where I parked to get my race number. With eight minutes to race time, they announced that all of the races were running 12 minutes behind. Whew! I had time to slug down a bottle of water and use the restroom before the race began.

When the race started, it was the usual scene. The gazelle-like runner sprinted forward, leaving the rest of us in their wake (no dust, it was too wet!). I made myself a pact that I would run the entire 4 miles, even though this was my first race of this distance. I’d done a 7k before, but had two running buddies who really pushed me into going faster than I would have on my own.

As we got about ¾ of a mile in, the course turned to soggy dirt road through the city’s fairgrounds. Surprisingly enough, it was almost easier to run on this than on the pavement. It made me wondering if I could be naturally good at trail running. The timer at the first mile told me my pace was 10:49. I was sure I’d heard him incorrectly. On my own, I’m a 12:30 minute mile runner. I’m SLOW! Anyway, at this time a woman ran up next to me and ran right next to me. I was about to pass someone else, so I sped up to make sure I didn’t get wedged between the two on the road and the woman raced next to me.

The woman stayed next to me for the next two miles. I kept hoping she would pass and when she wouldn’t, I’d speed up to get around her only to have her speed up to stay next to me. It got old (I have a space bubble I’m fond of!) and I eventually cut behind her just for sanity!

At mile two, the timer told me I was running at just over 22 minutes. What? Surely their timers were off! Just after mile three, I was told 33 minutes. Whoa, I’d be on track to run 44:00 if I kept this pace. Amazing! My competitiveness with myself kicked in and I kicked it up a notch.

I'm told I looked intense as I rounded the corner.

Just after the three mile mark, I physically felt like I was losing steam but I told myself that with only a mile to go, I wasn’t giving in. I started focusing on people ahead who I wanted to catch up to…or at least keep in sight. As I rounded the final stretch and caught a glimpse of the tents next to the finish line, I knew there was no way I was going to slow down now. Then, I saw my boyfriend and his son walking down the sidewalk toward me to take pictures; the first pictures I would have of myself running since I’d always gone to races alone.

When my boyfriend raised the camera, I gave the double thumbs-up and smiled, even though I was hot and tired of running. He and his son started clapping and I figured it was time to show off. I bolted ahead and kept picking up steam. That’s when I saw the timer at 43:15. If I hurried, I could hit my 44:00 goal! I moved my legs even faster than I thought possible and crossed the finish line. I knew I’d made it before 44:00, but didn’t see the official time. It was a miracle!

I see the finish!

My official time was 43:36, making my pace the fastest to date at 10:54 minute miles. I wasn’t fast enough to win any medals or ribbons, but I was fast enough to impress myself and that’s all that really mattered. Now I’m looking to really rocking my next 5k, knowing that I’m capable of pushing myself harder than I originally thought. It’s amazing what a really good iPod playlist can do for a run!

Next up: Warrior Dash!